Is It Better To Use Brick Or Stone For A Retaining Wall?

Retaining walls can be a great addition to your house. But they aren’t the simplest of features to build, so it’s always important to know you’re using the right materials. With that in mind, is it better to use brick or stone for a retaining wall?

It’s better to use stone for a retaining wall instead of brick because it’s stronger, more water and freeze-resistant, and more durable. A stone retaining wall requires less maintenance than bricks, saving money on repairs. But brick retaining walls are easier to build as bricks have uniform shapes.

Is brick or stone better to use for a retaining wall?

Stone is a stronger and more durable material than brick, which is why it is a better choice for a retaining wall.

Another factor that makes stone better than brick for a retaining wall is factors involving water absorption. Bricks are very porous and are designed to absorb water to a certain extent. Beyond this point, the moisture can begin to damage the inside of the brick. With the strain of a retaining wall, bricks will begin to develop cracks and fissures over time which will let more water in. This will turn into the gradual crumbling of a brick retaining wall. 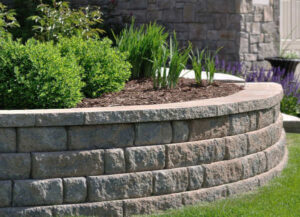 that it is usually easier than building stone retaining walls. The shape and size of the bricks you use for a retaining wall are usually all the same, with more reliable bonds. This helps brick retaining walls perform structural duty better. Brick is a cheaper and easier to build retaining wall option compared to stone.

There is the option of using ashlar stone for a retaining wall. This kind of stone can be easier to lay as it’s cut into brick-like shapes. It’s a more expensive retaining wall option but gives you the benefits of stone strength and durability, as well as the uniform shape of bricks.

What’s the difference between brick and stone retaining walls?

There are many differences between brick and stone retaining walls, one of the biggest being the shape of the blocks. Natural stone isn’t in a uniform shape. Often you will be handling a range of different-sized oval-shaped bits of stone for a retaining wall. Bricks are manufactured which allows them to always have a specific shape and size.

With brick retaining walls, to make them strong enough to hold the weight of the soil, they often need a cavity between two stacks of bricks. This cavity sometimes has another material inside. Stone, on the other hand, can usually be built to support the weight on its own.

The other differences between brick and stone retaining walls involve the strength and durability of the materials. In this case, the benefits of stone walls are better than brick walls. Brick walls are more prone to freezing absorbed water which can increase cracks. They also aren’t as strong as stone. Stone will be able to handle a greater weight from the soil behind the retaining wall than brick. Overall, stone has greater durability that will require less maintenance over time compared to a brick retaining wall. 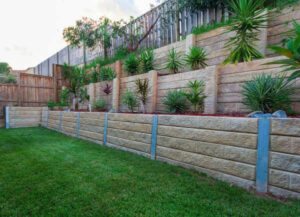 A brick retaining wall is considered a good project that anyone can do themselves. Stone retaining walls are usually recommended to be built by professionals because they are a bit more challenging to master.

With stone, you need to dig a deep trench for the foundations and ensure the foundation is level using shim stones to fill in any voids. You also need to lay landscape fabric, holding it in place during the laying.

Bricklaying is not easy, but its uniformity makes it a lot simpler. There are also plenty of bricklaying tools that help make building a brick retaining wall much easier if you’re by yourself. 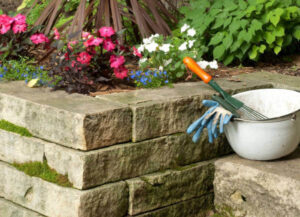 Is a stone retaining wall cheaper than brick?

But there are multiple kinds of stone. Natural stone is a good deal more expensive than brick. Manufactured stone, though, is only slightly more expensive and often can actually be around the same price as brick.

However, in either case, the cost of the labour is usually going to be higher for stone, too. Bricklaying is a more widespread skill, whereas building walls with stone are more specialized.

While you’re thinking about external features of your house, check out our article about bricks to use for a firepit. For quality bricklaying and masonry tools, check out our Paragon Masonry Tools shop today!