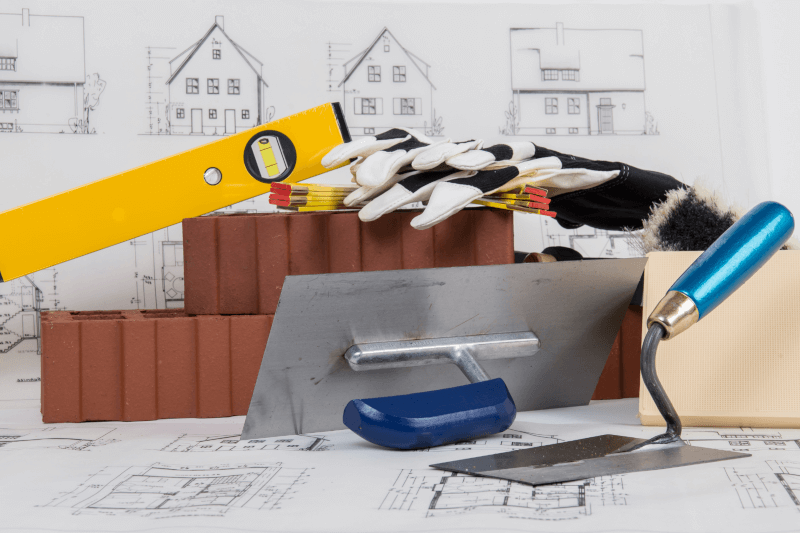 What Tools Should A Bricklayer Have?

Bricklaying is not a simple task and quality builds are important for long-lasting structures. Having the right tools makes the difference between a good and a great job. So, what tools should a bricklayer have?

Trowels, levels, and brick carriers are three of the most important tools for a bricklayer to have to properly align and lay bricks. They will also carry hammers, chisels, brick saws, chalk, and plenty of measuring tools. Bricklayers need many tools to ensure they build level and sturdy structures.

Bricklaying is a delicate art, and as skilled as any bricklayer might be, there’s no substitute for quality tools. Read on to find out more.

What are the most important tools for a bricklayer?

When it comes to the task of laying bricks, there are two tools that are the most important for a bricklayer to have. These are trowels and levels.

A trowel is the most important tool for a bricklayer. It is used to spread the mortar across bricks to keep them together. There are three most common kinds of bricklaying trowels. 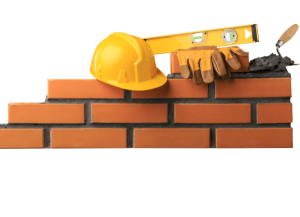 The first is a brick trowel which is the main one used to spread mortar and lay bricks. This is the most commonly used trowel for wall-building and other large bricklaying projects. A brick trowel, with a wider surface, is designed to hold more mortar than other trowels.

The second is a gauging trowel which has a rounded nose as opposed to the pointer ends of other trowels. It is best for bricklaying in tighter areas, especially trying to work around pipes and other round areas. It’s also used when installing fire bricks.

The third type of bricklaying trowel is a pointing trowel. This is narrower and pointier than a regular brick trowel. It is great for filling holes with mortar and when working in very small spaces. For example, when replacing a single brick, it is common to use a pointing trowel.

Alongside trowels, levels are one of the most important tools for a bricklayer. Spirit levels are best for making sure that the bricks are level. Checking the level of the bricks is vital for building a strong, vertical structure. Uneven bricks can cause a lot of problems for the structural integrity of building walls.

Other important quality tools for bricklayers to have include:

These tools are your basic bricklaying essentials, but what are the best tools for bricklayers?

The best tools for bricklayers

As a bricklayer, you are going to want good-quality trowels and there are lots of options available. For added bricklaying convenience, we also recommend investing in a Brickie’s Buddy. This is a magnetic panel that attaches to your belt. The magnets will hold your trowel securely by your side, making it easier to cart around while bricklaying. It also saves you from constantly bending down to pick up the trowel.

For moving your bricks around, look no further than a BT Brickcarrier. Grab up to 7 bricks at a time with a tried and tested design that will make the carrying aspect of bricklaying a lot quicker.

A box of Paragon Construction Chalk is best for marking your bricks in an almost dust-free manner. This chalk doesn’t snap as easily as other chalks, leaves sharp lines and is more water and heat resistant. Pair this with a string line and non-slip plastic line block for straight bricklaying measurements.

Now we know the best tools for a bricklayer, but there are even more that you will find in a bricklayer’s toolkit!

What tools would you find in a bricklayer’s kit?

We’ve covered the basic tools a bricklayer has, but there is still a long list of tools that are kept in bricklayers’ kits.

You will find a variety of clamps and bricklaying profiles. These are very important for corner and wall bricklaying. They act as a guideline for laying level bricks.

Bricklayers will also have tools to cut through bricks before they are laid. A multi-purpose diamond sawblade is a great option because it will saw through a range of hard materials. 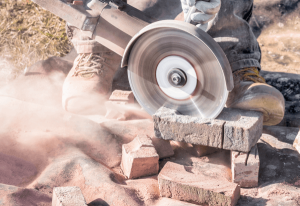 Even with a saw, bricklayers will have hammers and chisels in their toolkits. This is for shaping bricks when a sawblade may not be necessary.

Line and pins are another key part of a comprehensive bricklayer’s kit. They act as a guide as the wall is being built for new bricks, with points that can be inserted into mortar joints.

A hawk, also referred to as a hand board, for holding the mortar is almost certain to be a part of any good bricklayer’s kit, too.

Bricklayers will have a variety of measuring tools in their kits. We’ve mentioned the spirit levels. They will also carry a tape measure to mark the gauge of brick courses. This will be used most for walls. A folding ruler will also be carried by bricklayers and used for measuring cuts to make on the brick.

Bricklayers will own a square measure as well, used for measuring corners. Many will also have a sliding bevel. These are used to mark angles on bricks for arches. Sliding bevels are also handy for keeping a certain angle when laying bricks.

Let’s talk about the different types of hammers, chisels, and brushes that a bricklayer should have.

There are two main types of hammers that a bricklayer can carry. The first is a brick hammer. This hammer is specially designed to reshape and cut bricks. It is used often in restoration work. 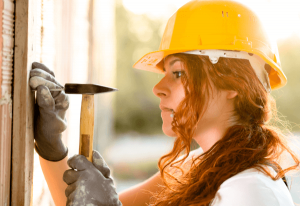 The second bricklaying hammer is a club/lump hammer. This is used to knock line pins into bricks and mortar. Club hammers are paired with a chisel unless they are being used to knock out bricks.

Bricklayers have two different chisels that are used the most often. A plugging chisel is used to clean out old joints in restoration work. They typically have a slanted end that helps prevent cracking and chipping brick surfaces.

The other chisel that bricklayers have is called a bolster chisel. This is also typically used for restoration brickwork. Bolster chisels knock off old mortar but can also assist in cutting bricks when you pair it with a club hammer.

Brushes that bricklayers should have include a mix of soft and scrubbing brushes. Softer brushes are great for removing excess mortar and cleaning down bricks after they have been placed. A bricklaying poly brush is an example of this.

Bricklayers will need tougher scrubbing brushes to clean their tools when they finish their work. It’s important to take care of the tools to produce the best bricklaying work.

There are so many tools that bricklayers need and will collect over their careers. To check out even more quality bricklaying tools, including rakers and scrapers, check out our products at Paragon Tools.