Double brick, also known as solid brick, is a traditional style for houses that has continued to remain popular as a preferred choice for many homeowners around the world. Because of its common use, many people wonder what the advantages of this style are. Also, if it’s really the best option for a home structure.

Double brick homes have several great advantages that make them a better choice for a house structure. They are stronger, more weather resistant and have good thermal transmission. Double brick is a more stable structure than other materials. The brick is useful for sound insulation within the home.

Why is a double brick house good?

More and more homeowners are picking brick veneer and other structural materials over double brick. But what are the advantages of double brick homes that you should be considering?

When you look at the positives of these homes, it becomes clearer that double brick style is possibly a better option. There are reasons the use of double brick has stood the test of time.

Here are the main benefits offered by a double brick home: 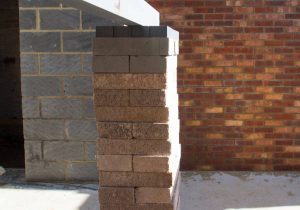 
With a double brick design, there is a small gap between the two layers of brick that make up the home’s foundation and structure. This space functions as a great way to properly insulate the home and slow the process of thermal transition. Because of this, the temperature inside the home will naturally be at a comfortable level without much help from your thermostat.

During summer, when it’s hot outside, the walls absorb the heat and allow less of it to make it inside your home. And during winter, a similar effect occurs with warm air staying inside while cold air is absorbed by the walls and buffer space. This natural insulation will aid in reducing your monthly bill and saving on energy in the home. Is a double brick house a better insulator than a single brick house with modern insulation? No, not really.

When the double brick method is used, the house structure is reinforced by the two layers of strong brick. This brick can stand its ground against the harshest conditions which is beneficial in areas with intense weather. It protects your house against natural disasters such as earthquakes and violent storms.

The sturdy materials also stand up well against high temperatures, reducing the threat of a devastating fire. The durability makes sure your home is as protected and strong as possible, increasing the lifespan of the house.

It is easy to cut the bricks, especially with a multi-purpose diamond saw blade, to fit the layout of your desired home! This means you can get durability with the look and space that you hope for.

The main interior benefits of a double brick house

Double brick protects the house interior structure and layout. Many other homes, such as those that use brick veneer, have an interior structure that is made up of steel or wood framing. These frames are not as strong as brick which can lead to problems like wall-bending. This is because these structures don’t have the same ability to support heavy fixtures, but double brick does.

Also, homes made from wood frames have an added risk of pest infestations, like termites, which can eat away at the wood. This is a concern for the stability of the house structure, as well as the house itself. But brick is resistant to these conditions and therefore double brick homeowners don’t have these concerns.

Double brick houses are also better for sound insulation. Brick has a natural acoustic advantage over other materials. This means that it’s much more effective at keeping sounds in the house while keeping those outside the house out. Not only can it insulate sound between the inside and outside of the home, but it can also have this same effect between the different rooms in the house. This is because the walls are thicker, boosting the acoustic advantage. So, you can watch something in one room and not be interrupted by your kid’s dance session in the other!

The space between the two layers of brick regulates temperature well. They can control how much hot or cold air is transferred from the interior to the exterior and vice versa. 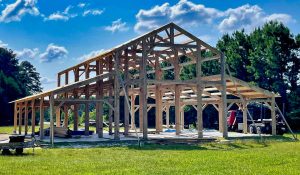 
Because of the more intricate structure of a double brick home, it can take much longer to complete the construction process. A double brick home usually takes over six months to finish while other homes made from materials like timber can be finished much earlier. This can cause problems for homeowners who have financial stress due to the extended time that they have to wait before moving in.

Double brick homes can take up more space. This could mean that homeowners won’t have the space needed for the big house they want. The wide walls form double bricking take up a significant amount of space on the land.

The construction of a double brick home requires things such as large foundations, reinforced steel, and a lot of concrete. This can lead to the total cost of the construction project quickly adding up and being higher than that of alternative structures. But, if you’re looking for a long-lasting home that you will get your money’s worth from, why not make the investment?

Double brick houses — also commonly referred to as solid brick or masonry houses — are generally built in one of two ways. Either from two layers of brick (as the name suggests) or from a layer of concrete that has an adjacent bricklayer on the exterior. This structural design can most commonly be seen in older brick homes, especially those that were constructed in the mid-20th century.

Double brick is different from brick veneer — the more modern option for brick housing — because it serves as a support for the structure of the home. If the brick were to be removed, it would have a drastic effect on the house’s foundational build as double brick houses do not have frames. Brick veneer, on the other hand, is brick only in terms of its aesthetics. The structure of these homes is actually supported by steel or wooden framing rather than the brick itself. So when deciding whether double bricks are better, you need to weigh up the cost vs the benefit in your particular situation.

Did you know that many wonder whether they should choose between brick veneer and cladding for their home exterior? Also, Bricklayers are a necessity for building the structure and exterior of your home, but does Ireland have a bricklayer shortage? Check out our latest articles in our Resources section.

If you are more of a DIYer, whilst you’re planning the outside features for your home, have you considered a fire pit? We have a guide on what bricks can be used for a fire pit.

This article was brought to you by Paragon Tools who has quality bricklaying and masonry tools in Ireland, ready for your building needs!